www.ej-cafe.com 07:42 tienganhcaocap
Thank You.
I would like to thank King Salman for his extraordinary words, and the magnificent Kingdom of Saudi Arabia for hosting today’s summit. I am honored to be received by such gracious hosts. I have always heard about the splendor of your country and the kindness of your citizens, but words do not do justice to the grandeur of this remarkable place and the incredible hospitality you have shown us from the moment we arrived. 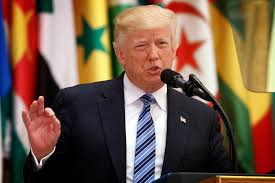 You also hosted me in the treasured home of King Abdulaziz, the founder of the Kingdom who united your great people. Working alongside another beloved leader -- American President, Franklin Roosevelt -- King Abdulaziz began the enduring partnership between our two countries. King Salman: your father would be very, very proud to see that you are continuing his legacy -- and just as he opened the first chapter of our partnership, today we begin a new chapter that will bring lasting benefits to all of our citizens.
Let me now also extend my deep and heartfelt gratitude to each and every one of the distinguished heads of state who made this journey here today. You greatly honor us with your presence, and I send the warmest regards from my country to yours. Thank you. I know that our time together will bring many blessings to both your people and to mine.
I stand before you as a representative of the American people to deliver a message of friendship and hope and love. That is why I chose to make my first foreign visit a trip to the heart of the Muslim world, to the nation that serves as custodian of the two holiest sites in the Islamic faith.
In my Inaugural Address to the American people, I pledged to strengthen America’s oldest friendships, and to build new partnerships in pursuit of peace. I also promised that America will "not seek to impose our way of life" on others, but to outstretch our hands in the spirit of cooperation and trust. Our vision is one of peace, security, and prosperity -- in this region, and all throughout the world. Our goal is a coalition of nations who share the aim of stamping out extremism and providing our children a hopeful future that does honor to God.
And so this historic and unprecedented gathering of leaders, unique in the history of nations, is a symbol to the world of our shared resolved [sic] and our mutual respect. To the leaders and citizens of every country assembled here today, I want you to know that the United States is eager to form closer bonds of friendship, security, culture, and commerce.
For Americans, this is a very exciting time. A new spirit of optimism is sweeping our country: in just a few months, we have created almost a million new jobs, added over three trillion dollars in new value, lifted the burdens on American industry, and made record investments in our military that will protect the safety of our people and enhance the security of our wonderful friends and allies, many of whom are here today.
Now, there is even more blessed news that I am pleased to share with you. My meetings with King Salman, the Crown Prince, and the Deputy Crown Prince, have been filled with great warmth, good will, and tremendous cooperation.
Yesterday, we signed historic agreements with the Kingdom that will invest almost 400 billion dollars in our two countries and create many hundreds of thousands of jobs in America and Saudi Arabia.
This landmark agreement includes the announcement of a 110 billion dollar Saudi-funded defense purchase -- and we will be sure to help our Saudi friends to get a good deal from our great American defense companies, the greatest anywhere in the world. This agreement will help the Saudi military to take a far greater role in security and operations having to do with security.
We have also started discussions with many of the countries present today on strengthening partnerships, and forming new ones, to advance security and stability across the Middle East and far beyond.
Later today, we will make history again with the opening of the new Global Center for Combating Extremist Ideology -- located right here, in this central part of the Islamic World. This groundbreaking new center represents a clear declaration that Muslim-majority countries must take the lead in combating radicalization, and I want to express our gratitude to King Salman for his strong demonstration and his absolutely incredible and powerful leadership. I have had the pleasure of welcoming several of the leaders present today to the White House, and I look forward to working with all of you.
America is a sovereign nation and our first priority is always the safety and security of our citizens. We are not here to lecture. We are not here to tell other people how to live, what to do, who to be, or how to worship. Instead, we are here to offer partnership, based on shared interests and values, to pursue a better future for all of us.
Here at this summit we will discuss many interests that we share together. But above all we must be united in pursuing the one goal that transcends every other consideration. That goal is to meet history’s great test -- to conquer extremism and vanquish the forces that terrorism brings with it every single time.