Home tienganhcaocap Have You Ever 'Played the Fool?'

Have You Ever 'Played the Fool?'

www.ej-cafe.com 08:20 tienganhcaocap
Hello and welcome to Words and Their Stories from VOA Learning English. On this program we explore common words and expressions in American English.

In the United States April 1 is a day when you need to be a little careful. 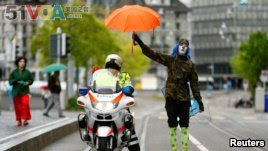 A person dressed as a clown holds an umbrella over a police officer in Switzerland, 2017.

Why?
It is April Fool's Day so someone might play a practical joke on you -- a harmless trick for fun.

We did a program on fool expressions a couple of years ago. We explained how to use foolhardy and foolproof. We talked about the idiom "A fool and his money are soon parted."
But we left out some things. So, here we are again talking about fools!
Probably the most common definition of "fool" is someone who is silly and, well, foolish. It is very easy to trick a fool.
"To fool" can also mean to pretend. For example, "The child said he was sick but he was only fooling. He was in perfect health."
If you say, "I was only fooling" that means you are not serious. You are kidding. So, if you say something to someone as a joke but they take you seriously, you can say to them, "I was only fooling." Here, you could also say, "I was only kidding."
We often pair "fool" with the verbs "play" and "act" to form the expressions play the fool and act the fool. They both describe someone who is easily tricked or deceived. Or sometimes, we play the fool because we fall deeply in love and cannot think clearly.
Love runs deeper than any ocean
You can cloud your mind with emotion
Everybody plays the fool, sometime
There's no exception to the rule
Listen, baby, it may be factual, may be cruel
I want to tell ya!
Everybody plays the fool
The Main Ingredient sings "Everybody Plays the Fool"
Sometimes we use it to describe someone who is not easy to fool. For example, if your friend John is really smart and not easily tricked, you could say that he's not one to play the fool. If that is too wordy, you can simply say he is no fool.
If you make a fool of yourself, you do something that makes you look foolish or silly.
For example, imagine you are at a party. Suddenly your best friend sees a young woman who he really likes. He wants to get her attention. So, he starts dancing. But, no one else is dancing. In fact, there is no music playing. You calmly go up to him and say, "You might want to stop. You are making a fool of yourself."
But making a fool of yourself is better than making a fool of someone else. That is just mean. If a person tries to make a fool of you by yelling at you in public, just walk away. He will end up making a fool of himself.
Now, if you are fooling yourself you are unwilling to accept the facts of a situation. In other words, you are in denial. If you think that you can learn perfect English in a very short time without studying or practicing, you are really fooling yourself.
Now, when we pair the word "fool" with "around," we get an expression that has several meanings.
One is to spend time without any purpose. If you have the day off from work, you might decide to fool around all day.
Another meaning is to behave playfully. The two friends were fooling around near the train tracks when they heard a call for help!
But be careful. "Fool around" also means light-hearted sexual activity. For example, the husband and wife were fooling around in the kitchen when their friends and family walked in for dinner. Awkward!
In these three example, you could also say mess around. It has the same meaning and we use it in the same situations.
Finally, we often use the word "fool" in warnings to others. For example, "Don't fool around with that! You will break it." Or, "Stop fooling around." And the ever popular, "This is no time to fool around."
I'm Anna Matteo. And that's end of this program. And this will be the last Words and Their Stories ... ever.
I'm just fooling. We'll back next week with a new show. No fooling!
And you're fooling yourself if you don't believe it
You're kidding yourself if you don't believe it
Why must you be such an angry young man
When your future looks quite bright to me
Anna Matteo wrote this story for VOA Learning English. Caty Weaver was the editor. The song at the end is Styx singing "Fooling Yourself."